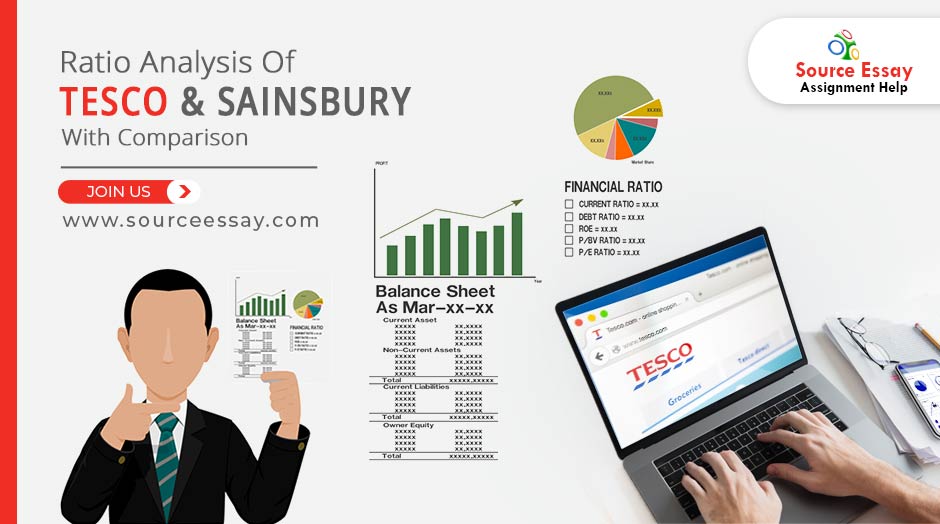 The financial position of TESCO will be discussed in this report. Financial analysis is an integral part of the financial and non-financial decision-making process. It gives vital information about a business conduct to the investors and stakeholders to estimate its performance. Here, the financial analysis will be conducted for TESCO, one of the finest groceries and general merchandise retailers operating in the UK. The company has started its business in 1919 and it is being carried for almost 102 years. The company is quite big and having a registered in the London Stock Exchange. As of 2019 the company had almost 6800 operational shops. The service area is also big as the company is servicing it over the United Kingdom, Ireland, India and others. However, the majority of the business is made in the UK. For an effective financial analysis, a competitor bench marking is required to estimate and comment on the company’s performance. In the given case, the financial ratios will be the tool that will be heeling in estimating the overall performance. It will be compared with the Sainsbury, which is almost the same in category and size.

In the given case, both companies’ financial ratios are that Tesco’s and Sainsbury’s is calculated and categorised into Profitability, liquidity, efficiency, and gearing.

The profitability ratios uphold a company’s profitability position, which shows its earning capacity related to sales and investment.

The net profit ratio is calculated by comparing the net profit earned by a company to its sales. Higher net Profit will indicate the potential of a company to convert more of its sales to net profits and create a return to the shareholders (Abdul, 2017).

Here, the net Profit of Tesco decreased by 24% as it earned a net profit of 2% on sales in 2019 but earned only 1.5% in 2020. Also plagiarism free assignment help experts deduces The decrease in net Profitability is indicated by the decrease in gross profit levels and an increase in operational cost.

Simultaneously, the net Profitability of Sainsbury is stood at 0.6% in 2019, which is decreased to 0.5%. Thus, the sales decrease is not higher than Tesco, but it is very poor than Tesco (Laitinen, 2017).

The quick ratio is almost identical with the current ratio; however, it is considered a slow sale item. Therefore, it is not included in the inventory. The quick ratio helps in estimating Real time solvency for the company. If the company is having a quick ratio of 1 or more than that, in such case, it will be in an advantageous position (Öztürk&Karabulut, 2018). Know more about quick ration and its key roles from online assignment help Perth experts of SourceEssay.

The quick ratio of Tesco was 0.47 in 2019, which is not a favorable position; however, bu increasing the current assets and decreeing the inventory the company has helped with controlling the is solvency position. In 2020 the company’s quick ratio was increased to 0.60, which is almost 26% increase.  Furthermore, the company can lower its current liability by a huge margin.

The efficiency ratios show the performance metric of the company, which are highly related to the Profitability and asset management. Online Assignment help Sydney defined if a company is competent in terms of efficiency, then in those cases, it will be effective in earning shareholders confident as well as profits.

In the given case, the following three ratios will be calculated.

The creditors turnover ratio shows how efficiently the company is paying the credits that it has taken form accounts payment for the supply of products and services. The accounting payable are a reliable source of getting no-cost credit, but the borrower needs to pay the dues on time. A good creditors turnover ratio will be an indication of that. You can also check credibility of the creditors using plagiarism checker tool.

In the given case the creditors turnover of Tesco was 6.61 in 2019. However, the company’s creditors’ turnover is increased by a small percentage and now amounting to be 6.67 times. It indicates that the company has increased its payment position. However, change is not big.

The company’s inventory turnover ratio was 24.26 times in 2019, which decreased to 23.83 times in 2020. The decrease in the asset indicates a decrease in performance and ability of the company to sell its inventory.

The gearing ratios reflect the capital structure of a company. A company having high gearing will be indicating high-risk exposer compared to a company having low gearing position.

The debt-to-equity ratio is calculated by comparing the involvement of debt compared to equity. Online thesis help experts said,A company with a higher debt to equity ratio will carry high risk (Nuryani & Sunarsi, 2020).

Abdul, A. A. A. (2017). The Relationship between Solvency Ratios and Profitability Ratios: Analytical Study in Food Industrial Companies listed in Amman Bursa. International Journal of Economics and Financial Issues, 7(2), 86.

Allad,  (2017)I. A Study on Selected Indian Software Developing Companies Based on Debtors Turnover Ratio.

Farooq, U. (2019). Impact of inventory turnover on the Profitability of non-financial sector firms in Pakistan. Journal of Finance and Accounting Research, 1(1), 34-51.

Öztürk, H., & Karabulut, T. A. (2018). The relationship between earnings-to-price, current ratio, profit margin, and return is an empirical analysis of the Istanbul stock exchange. Accounting and Finance Research, 7(1), 109-115.