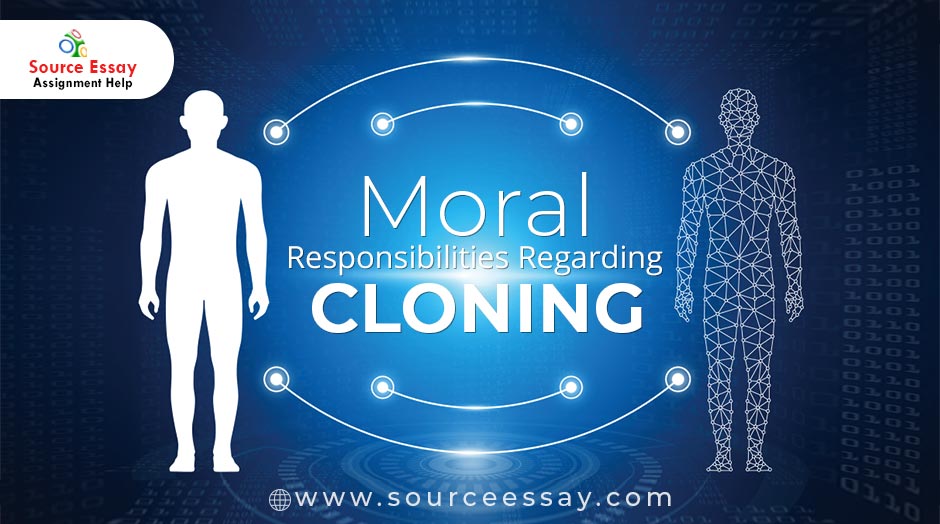 The nineteen and twentieth century was marked by scientific research, genetic manipulation and cloning. With technology invasion, cloning technology has shown remarkable developed in different parts of the world, but unfortunately, there is no legal framework has not been created supporting development.

Cloning referred to as making an identical copy has been used in various field of biology to produce a genetically identical copy. Human cloning allows couple with low fertility to produce offspring identical to them. For instance, if a man body is incapable to produce sperm, then cloning would help them to have offspring which are biologically related. Meanwhile, it required an ideal transplant donor(President’s Council on Bioethics (US),2002).

However, creating genetically identical twins surround by ethical concerns. Like will science use overpowering the entire human race triggering risk of slavery-era?

This report aims to describe the moral responsibility regarding cloning followed by reflective analysis.

In the fastest evolving society, an ethical approach is all about how the information is being used. Under this bracket, genetic engineering is defined as laboratory methods techniques allows manipulation of genetic materials, thus offspring obtained have a combination of hereditary elements.

For a better understanding of the cloning process, its theoretical approach is required to understand at first. Cloning allows researchers to produce clone identical to one another, even several scientists believe that twins are a natural product of cloning. Although this process takes 150 days(Aach ET.AL, 2019)

In 1998, human embryonic cells were first separated that was used to treat Parkinson diseases and heart problems. But several religions believe that by doing cloning we are playing with GOD art so that it should be strongly discouraged. Moreover, as clone organism can lose the ability to survive, medical science is still focusing on improving stem cell culture to improve fertility and curing many diseases (Bongso & Richards, 2004).

To know more about cloning, you can also take assistance from SourceEssay Essay typer.

Most of the criticism has arisen due to the low survival rate of clone and sometimes they pose certain abnormalities as well. The period of clone to reach adult age is less than 0.3% for cows and 1% for sheep. On that note several Scientists have said, clone production would be just a wasting of embryo and fetes

In a view of Nasrullah et.al, 2019, when they experimented on blastocysts they obtained 242 eggs and 16 sperms can produce embryo and this could be unfair with the women who gave eggs but in the end lost the fetus. The cloning process in human is responsible for psychological disorders affecting individuality and uniqueness of the organism. Also, this will cause abnormality in later stage of twins. To know what kind of abnormalities found in the clone for your assignments, take help from SourceEssay Assignment Writing Services Birmingham.

In case you are looking for online assignment help in Perth, then SourceEssay would be the best destination for you with the help of online experts you can get effective assignment solution at less price.

This is a process in which asexual cells are being transferred into the cells whose DNA is get removed and after its reproduction, it will be placed into recipient uterus. This process results in genetically identical clone same as a donor(Nabavizadeh ET.AL, 2016)

It is also known as embryonic cloning actually used to build human embryos for the research purpose. The objective of this type of cloning is not to produce cloned human even using human cells for testing regenerative medicine. Cells are separated from the embryo after 4 division which is creating several ethical concerns. These researchers are hoping this cloned cell will be definitely replaced Alzheimer or cancer cells etc,

As this technology is new, the outcome expected is surrounded by several ethical norms. During the cloning process, it will create damages to natural ailments. There are external challenges are imposed after cloning operations.

If there will more clone present in society, there will be a higher probability of their exclusion.

Despite this, 99% of the clone formation are produced in the form of devastation

Premature ageing is also noticed in Clone. For example, if the donor is 50 years old, then the clone produce will be of the same age that is found in the case of Dolly sheep (Jaenisch, 2004)

Cloning profound is likely to damage sentiments of religious society, stop establishments of family, it is found to against divine nature, and it is running emotions among cloning genera.

Cloning also results in unnatural medicine methods. Like the powder, milk is used for the infants. An unhealthy clone can affect healthy person mental health and diet as well.

At last, cloning will lead to a complication when it comes to recognizing criminal sentiments. A cloned person will have exceptional intelligence, height who can oppress for the personal benefits

Bioethical issues are always considered as the main concern for the society especially in terms of religion and secular point. Human and therapeutic cloning has witnessed major blockages and strong discouragement over a period. The use of embryonic cell in therapeutic cloning is subjected to the abortion debate. Regarding reproductive cloning, people said, technology is not that much advance or could be abusive for the society as a scientist are trying to playing with God creation.

By the end of 2015, around 70 countries have banned cloning (Terec-Vlad, 2017).Anyway assessing both advantage and disadvantages of the technology is complicated as difficult as it will aid human to uncover unrevealed psychological disorders aspects, but at the society level, it will create moral doubts.

Cloning is a rapidly evolving technology used to produce genetical identical twins, but this is subjected to moral concerns and bioethical issues. It faces several emotional, psychological issues that lead to its banning. In this report, we have defined first how cloning allows researchers to produce clone identical to one another used to treat Parkinson diseases and heart problem. We have illustrated human cloning process that is reproductive cloning that is a process in which asexual cells are being transferred into the cells whose DNA is get removed and other is therapeutic cloning which is sole used to build human embryos for the research purpose. Aftermath we have discussed internal, external bioethical damages due to cloning followed as damaging sentiments of religious society, stop establishments of the family also could be resulted in unnatural medicine methods.