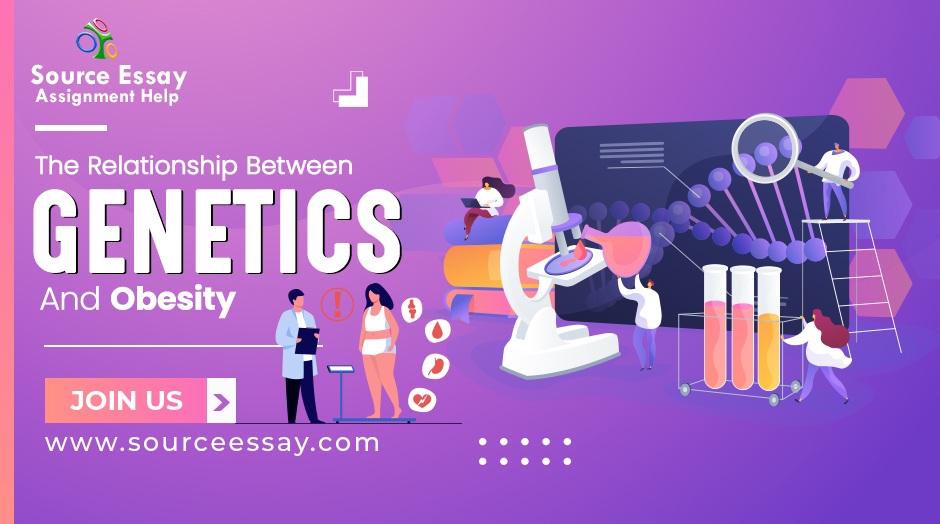 It’s been in news since long period; obesity is a component of genetics. In 2001, six genes were found to be linked with monogenic obesity. 7 years later, four polygene and eight mono genes have been discovered in this field associated with obesity.

Obesity in the UK has been increased epidemically accumulated excessive fats promoting the high intake of calories and decreased physical activity. The increased prevalence of obesity among children and adults including obesity sleep apnea is linked with psychology dietary and lifestyle factors.

Most of researchers and study progressed have shown obesity develops due to distorted lifestyle, but some studies have also recommended its genetic evidence. In an outlook of Puiu et.al, 2013, 40% to 77% observed variance have shown human body weights are somewhat inherited.

A striking observation of the health survey of England suggested that around 28% of adults living in the UK are obese furthermore 36% are overweight. The same report has explored males are more likely to be obese than females where people aged 45-74 are more obese than any other age groups (Baker, 2021). Whether we talk about demographically, age-wise or at genetics level, obesity is a huge problem for the growing society. The purpose of this report is in three folds, first providing deprived areas of England where obesity has been increasing at an alarming rate, second discussing the relationship between obesity and genetics and third identifying key causes underpinning genetic involvement in obesity development.

Being a group member of one of the prevalent diseases, Obesity affects one’s well being to a great extent. In ancient times, Hippocrates Greek philosophers first recognized the linkage between obesity with other diseases. The obesity phenotypic has become a major concern at the global level particularly in the affluent industrialized countries where the United Kingdom and the United States both are in the top in diseases ranking list.

According to world health organization definition obesity or overweight is generally described as accumulated fat affecting or causing impairment to body functions.

Throughout the year’s researchers, attention was focused on identifying molecular events whether obesity arises due to single gene mutation, deletion, replacement of single polymorphism nucleotide etc.

The recent success of genomes associated science have fetched worldwide attention as it becomes able to justifying the discovering of approximately 30 loci responsible for obesity development. The strongest link still considered with the fat-mass and obesity-related gene (FTO) variants.

Despite covering the current obesity epidemic in every region of the world, the usages of pharmacological existing still subjected to debate. For instance, drugs used to eliminate obese factor-like sibutramine is known for its side affects as it increases heart rate and blood pressure rate to a major rate. Henceforth in a view of essay helpers, it becomes equally important to identify the genetics of BMI(Body Mass Index) for delivering such targets in relatively fewer times.

Many researchers have said, the pathogenesis of obesity comprising multiple environmental and genetic factors interaction.

It is highly believed, the distorted lifestyle and inappropriate intake high calorie was the major concern behind rising obesity among adults and children. However, evidence also depicted the strong connection genetic and obesity altogether.

Accumulated evidence has implicated genetic components playing a major role in becoming obese. Xiu and Giant, 2015 have noted Twin model which was widely used for the assessment to a given trait because of monozygotic traits are identical. Based on that monozygotic twin have reported 50-70% of genetic material having concordance for fat mass whereas dizygotic twin has shown the less concordance of fast mass accumulation.

Further, when evidence collected by noting parental studies, a strong correlation was figured out between parents and their offsprings. That means parents having identical twins, at the same time there is a family history of obesity, there is high chances offspring will be adopted or inherit obesity.

Such findings attributed a major role when it comes to establishing linkage between obesity and genetic altogether, however the complexity interaction it involves still need attention.

If you need more information about Twin model and how it is associated with obesity, then SourceEssay based assignment writer will help you and solve your query anytime.

Differences Between Monogeic And Polygenic Obesity

There has been partially evidence uncovered till today following describing reoccurrence of obesity due to monogenic and polygenic forms. Currently, Four gene i.e MC4R, PCSK1, BDNF(brain-derived neurotrophic factor) and POMC that we have already discussed in the above section have been mutated and causing disorder.

According to the report of Choquet and Meyre, 2011, more the 150 coding loss of function in obese have been seen associated with monogenic forms as MC4R gene sequence increases the risks of obesity to a wider range.

On the other side, polygenic obesity is very commonly found in young children. It arises when the genetic sequence is susceptible to an environment promoting more energy consumer rather energy expenditure.

In the past six years, insulin-induced gene 2(INSIG2) was the first reported loci have primarily changed the perception of genome-wide association study.

The human genome consists of hundred of patterns leading to genetic diversity. Adaption in changing environment or a diet somewhere triggers or simulates downstream functioning. The increased pressure of agriculture to produced millions of hectors foods per day have amalgamated the dietary and forced our genome to increases its efficiency for fat accumulation. Likewise, GMS study has shown age, ethnicity, gender, diet and educational status are all modulating the risk factor of obesity. Meanwhile, if you want to know what are other approaches GMS are using to entail about obesity rapidness, then move to SourceEssay based essay Deutsch today.

Growth Of Obesity In The UK

According to the world health organization report, obesity can be defined as the burden of malnutrition. Today we are witnessing more people are obese than malnutrition. Once it was considered obesity was a major problem for affluent industries, but the environment is changing and the population increases, hence to make sources abundant, we are somewhat leading to an unhealthy lifestyle. Today a vast majority of obese people are living in developing countries which are comparatively 30% higher than in developed countries.

In the same report, it was notified, there are some preventable measures one can take slow down obesity pace, but none one is successful to reverse this epidemic. Being overweight can increase the potential risk for diabetes development also associated with cancers such as epidematrical cancer. Despite the risk of getting non-communicable and communicable diseases is much higher in the case of an obese person. Taking entire things in a scenario, various governments whether they are of developing or non developing countries, they are focusing on exploring the facts and figures leading to this epidemic. In this direction, they are still an emphasis of GWAS study approaches to know if one gene gets mutated or deleted, why this happen or it can be preventable at bioinformatics levels. To know about such policies, you can take assistance from SourceEssay based instant essay help expert’s team.

Several types of research have concluded that obesity formulation extended by the gene which is highly influenced by another gene. These genes might be located adjacent to or very far from the loci. This in turn led to long-range interaction among gene causing obesity. A recent study has revealed interaction in between SNPs in FTO with obesity might be happened due to linkage of FTO variants with some other gene. According to Ragvina et.al, SNPs – an obese associated rs8050136, rs1421085, rs9939609, and rs1781744 In FTO regulate IRX3 gene which is located several megabases away from it. On that note, FTO regulation with IRX3 gene signifies a long range of gene interaction that can either suppress or determining obesity.

Therefore it can be deduced a long-range interaction among gene also led to obesity development in the long run.

Traditional invasive surgery method is not efficient to eradicate obesity disorder from the roots. Therefore it can be said, prevention is the most appropriate strategy to conquer the obesity epidemic. Using genetics and its comorbidity is a promising way to reduce the high risk of obesity development. What is meant by promising genetics, well a complete genomic sequence can help to know which gene solely responsible for obesity A gene mapping in border perspectives helps experts to understand bio mechanism of obesity and this information can be more important for clinical purpose(Albuquerque et.al, 2015). For instance, people might carry differences in perception of hunger that predisposed group into a category. In the long run progress of genetics to apprehend obesity causes will help in building tests and designing new treatments.

Some people respond differently to different conditions, and this can be triggered by genetic variation alone. An epigenetic change includes methylation and alteration of histone proteins. These epigenetic primarily occur at prenatal status or postnatal period. Maternal nutrition is a major concern leading epigenetic changes. Level of protein consumed during pregnancy such as Vitamin B12, folate and methionine affects methylation (Goodarzi, 2018). During this period over nutritional consumption during pregnancy influence, the sensitivity of neuron and potentially affects the future risks of obesity in a child.

If you want to know more about epigenetic changes and how it leads to obesity development, take online assignment help experts assistance from SourceEssay today.

Obesity is caused by a complex interaction among predisposing gene, behaviour and environment. The increases risk of obesity has become a major concern over the decades. In this report, we have taken such a scenario and try to establish a framework to illustrate the thread between genomics and obesity in the same line. On that note, we have deduced definition of obesity or overweight is generally described as accumulated fat affecting or causing impairment to body functions. Currently, we have found In human genome obesity caused by single gene mutation are reported in eleven prominent genes including leptin and leptin receptor. Also, a study has revealed interaction in between SNPs in FTO with obesity might happen due to linkage of FTO variants with some other gene. Aftermath we have defined how genetics can be supported to understand the depth of obesity like a gene mapping in border perspectives helps experts to understand bio mechanism of obesity and this information can be more important for clinical purpose. In addition to this, we have taken account epicentre changes that increase the risk of obesity. These epigenetic changes influence the sensitivity of neuron and potentially affect the future risks of obesity in a child.

To know more about relationship between genetics and obesity get nursing assignment help uk from SourceEssay today.

Goodarzi, M. O. (2018). Genetics of obesity: what genetic association studies have taught us about the biology of obesity and its complications. The Lancet Diabetes & Endocrinology, 6(3), 223-236.