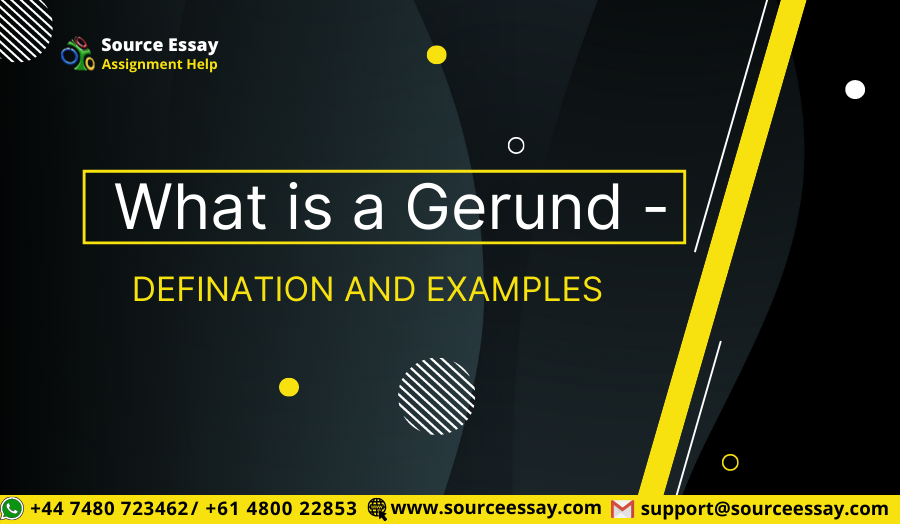 According to (Lowe, 2017), Gerund is known as the noun form of a verb that ends with ‘ing’. For example ‘playing’, ‘Eating’, ‘dancing’ and similar. Right away Gerund becomes confusing in learning as these can be used in form of a continuous form of the verb.

Gerund, pronounced as ‘Jerund’, is a verb acting as a noun. In that sense, Gerund can be used as the verb to describe the action of something or someone happening continuously (Kaunisto and Rudanko, 2019). Gerund refers to the thing which shows the concept that can be used in the subject, direct and indirect objects, and preposition of a sentence. Gerung cannot stop being a verb. However, Gerund plays the role in the sentence which can be shifted and states the description of an action to be the central point of the sentence. The term Gerund is observed to be used in the general regime of speech in most countries on a daily basis. Gerunds are formed with verbs, but it acts more as a noun form. Gerunds are very easy to spot since each and every gerund with ‘ing’ added as the tail and in writing, there are no exceptions in following the rule (Rahayu, and Aziz, 2017). There are various grammatical rules and like other grammatical rules Gerund also takes a little bit of determinative task to spot this. The major issue is to represent all the participles at the end of the verb with the use of ‘ing’ and when one is able to define Gerunds, it will also be easy to measure the key distinction between gerunds from the present participle (Akib, and Ohorella, 2018.).

Before noting the examples of Gerunds it’s important to look into the verbs contained by Gerund.

What Is The Function Of Gerund?

Gerund as the noun

Noticing the above examples, one can say that gerunds are the verbs that can be considered through the present participle form like words with ‘ing’, Seeing, Wondering, and other similar. However, the actual case is not the same this is not what makes the verbs gerunds. For making a verb a gerund the verb needs to act like a noun in the consisting sentence where on the contrary present participle verbs are not the same as they mention the action in the particular sentence.

These examples are the examples of present participle not the gerund as the verb with ‘ing’ is used as an action that a noun is to perform but not used as a verb in the noun form. Likewise, Gerund also acts like noun phrases like it acts as a noun in a sentence. For instance, this implies that gerund phrases can be considered as the subject of the sentence to be used with a complementary connection with the subject. Here an auxiliary verb or also known as a helping verb can be used to look at the examples of each definite idea.

Here sleep is a verb and with the ‘ing,’ it forms Gerund which acts as a noun in the sentence.

In case you have a doubt, get immediate assistance from online assignment help Ottawa experts of SourceEssay.

Gerunds are not only used as the word but also play an active role to define another noun of the verb in the sentence (Akib, 2018). Similar things like gerunds as nouns or noun phrases, gerunds can also act as objects in a particular sentence or clause. Gerunds can be used as direct and indirect objects of the preposition (Writing Explained. 2022). Some examples of gerunds as objects, gerunds as direct objects, and gerunds as an object of a preposition can be observed.

What Are The Major Types Of Gerunds?

According to the discussion (Dailywritingtips.com. 2022), Gerund is known as one of the three main classes of words that can also be indicated as verbals. These words are based on the verbs which express an action or a state and serve different grammatical functions. According to essay typer Gerund also functioned as a noun or object that can be expressed through a single word of phrases. There are four main types of Gerunds/ phrases that exist which are subject, the object of a preposition, direct object, and lastly subject complement.

The first type of subject implies the noun with ‘ing’ which is generally a verb but acts as a name for a certain activity.

Playing on the grounds is the best physical exercise for the boys. Here playing is an action that the boys could perform but is defined as a subject in the sentence.

Playing in the summertime becomes a challenge for the boys due to the heat. Here gerund is followed by a modified adverbial phrase and considered to form a gerund phrase.

Direct objective is another type of gerund where the direct object of any specific subject can be observed as the results of action, not for the action of the verb (TheFreeDictionary.com. 2022).

My friends admire my cooking. Here ‘admiration’ is not used for the cooking action done by me, but admiration did as a result of my cooking which my friends might test before.

Subject complement can be considered as another type of Gerund where the action again can be described with an action that has already been done before instead of the act of doing it (English Grammar B1 Level. 2022). Monica’s favorite hobby is cooking. This statement has been observed as the inverse form of action where Monica’s favorite hobby is the subject and cooking has been used as the complement. To know more students can take help from online assignment help experts.

How To Create A Gerund

One can create and form Gerund with the addition of ‘ing’ at the end of any root verb which has already been discussed earlier. Though Gerund can exist in present participle form but a verb that can be observed in present participle form cannot automatedly change to Gerund (Unggul, and Gulö, 2017). In the creation of Gerund, it needs to keep in mind that gerunds are formed with verbs and also result as a verb in the sentence but their function in the sentence is to denote the noun. Here the creation of nouns can be stated with an example.

Max does a great job of saying this. Here Gerund saying is derived from the verb ‘say’ with the addition of the suffix ‘ing’ and the result ‘saying’ is the verb that shows Max’s action. The creation of a gerund and its use in the sentence exhibits ordinary verbal properties like taking general verbs, objects, or adverbs.

State The Difference Between Gerund And Infinitive

Gerund and Infinitive have differences which can save to making specific grammatical mistakes while writing. For instance, any word which is formed with the use of a verb acting as the noun ends with the suffix ‘ing’ is known as gerund which has already been discussed above. On the other hand, infinitive phrases are formed with the use of the word by placing it before the verb (Gingersoftware.com. 2022). Both the infinitive and gerunds can be used as subjects in sentences where both can serve as verbs or objects in a sentence. After knowing the rule to determine which one is a gerund, and which is infinitive it would be easier to know the way where these elements can work in the same way as well. This is the time to note the fundamental distinction between gerund and infinitive where gerund can be an object of the preposition, but infinitive usually cannot object of a preposition.

At the very beginning glance where it can seem difficult to identify when gerund can be used in any sentence and when infinitive can be used. One can consider some guidance to use gerund and infinitive usage more helpful.

In the viewpoint of my assignment help, experts Gerunds are best to use in any sentence when to denote an action done by a subject.

I can’t stop worrying about him.

In this sentence worry is the real verb and with ‘ing’, it is constructed as a gerund.

On the contrary, infinitives are known to be best to be used in any sentence about actions that are not real or more abstract.

She would like to think about something. Here thinking is not done in the present as it will be done in the future which denotes the use of the infinitive.

After the end of the discussion about gerund, it has been evaluated with a number of evidence that gerund is a verb that states an action but functions as a noun in the sentence. A gerund is used in the place as an object of a verb or preposition. In addition, gerunds can also be used in five different ways as a preposition, object, and noun. According to the thesis help experts Subject of gerund, direct and indirect object gerund can be added. Gerund as an object with the preposition can be used in a sentence only by adding ‘ing’ which is known as a suffix. use of gerund as an object of the verb is the gerund which becomes an object of the verb and on the other hand subject of the gerund in a sentence can be considered in a similar way where a noun can be added as the subject. On the basis of the above-discussed rules, guidelines, and differences required to follow during the use of gerund and infinitive in a sentence, students are able to compete for the actual use of suitable gerund in the sentence as a subject where it can be observed that one can mistake between a present participle and gerund due to lack on knowledge in the correct grammatical use of gerund in the sentence. It’s important to know about the difference between gerund and infinitive during any writing task.

Akib, M., 2018. THE STUDENTS ABILITY TO USE GERUND AND PRESENT PARTICIPLE.

English Grammar Today. 2022. Gerund as the object of a preposition. [online] Available at: <https://www.english-grammar-today.com/gerund-as-the-object-of-a-preposition.html> [Accessed 23 June 2022].

Writing Explained. 2022. What is a Gerund? Definition, Examples of Gerunds. [online] Available at: <https://writingexplained.org/grammar-dictionary/gerunds> [Accessed 23 June 2022].