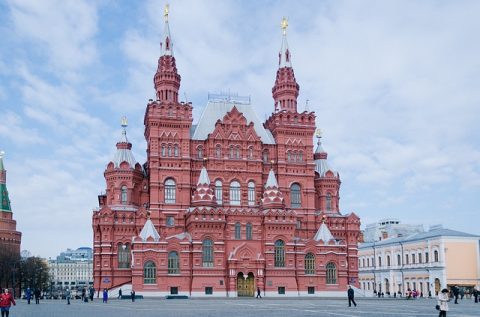 Red Square is a prominent and popular city square in Moscow, Russia. It divides the Kremlin, the old royal castle and now the official home of the President of Russia, from a well-known commercial area famous as Kitai-gorod. Red Square is ever so often regarded as the central square of Moscow as the city’s main streets, which link to Russia’s key highways, emerge from this square.

Red Square is centre to some of the country’s most irreplaceable and significant landmarks. It was built on the eastern side of the Kremlin, Moscow’s historic fortress and the centre of the Russian government. Its origins date to the late 15th century when the Muscovite prince Ivan III (Ivan the Great) extended the Kremlin to reveal Moscow’s growing power and prestige. An important public market and gathering place for centuries, Red Square houses the elaborate 16th-century St. Basil’s Cathedral, the State Historical Museum, and the gigantic GUM Department Store. It is also known as a modernist resting place for the revolutionary leader Vladimir Lenin. During the 20th century, the square became famous as the place of extensive armed defence parades and other demonstrations intended to display Soviet power.

Contrary to common mistaken belief, Red Square’s name is entirely unconnected to the crimson color of its several structures as well as to the Communist Party’s link with the color red. In its initial avatar, Red Square was well-known as Trinity Square, as a tribute to Trinity Cathedral, which stood on its south during the rule of Ivan III. However, from the 17th century onward, Russians started calling the square by its present name, “Krasnaya Ploschad.” The name Red Square derived neither from the pigment of the surrounding bricks, which, actually, were whitewashed at some times nor from the connection between the colour red and communism. Rather, the name came about because the Russian word ‘krasnaya’, which means “red” is related to the word ‘krasivaya‘ meaning “beautiful” in Old Russian, was applied to a small area between St. Basil’s Cathedral, the Spassky Tower of the Kremlin, and also the 13-meter-long herald’s platform widely known as  Lobnoye Mesto. Contrary to the repeated misunderstanding, it really never was a place of execution. From time to time scaffolds were positioned by it, but generally public executions were carried out at Vasilevsky Spusk which was situated behind St. Basil’s Cathedral. Tsar Alexei Mikhailovich formally included the name to the whole square, which had previously been called Pozhar, or “burnt-out place”, with regards to the fact that many buildings had to be scorched down to make room for the square. Some former Russian towns, such as Suzdal, Yelets, and Pereslavl-Zalessky, have their main square called “Krasnaya ploshchad”.

History
Several early Russian cities built kremlins, or fortresses, to guard themselves against intruders. The original Kremlin in Moscow began in 1156 as a wooden building north of the Moskva River. As Muscovite rule and prosperity expanded by the late 1400s, Prince Ivan III ordered the region now known as Red Square–which at the time was a slum or shantytown housing poor farmers and convicts–cleared. Ivan the Great, as he was acknowledged, built the Kremlin into its most grand form yet, bringing in Italian architects to construct new fortified stone walls and buildings such as the Cathedral of the Assumption which is also popularly known as the Cathedral of the Dormition.

Czar Ivan IV also was known as Ivan the Terrible ordered the construction of a cathedral on Red Square’s southeast end in 1554 to honour his capture of the Mongol stronghold of Kazan. Though it was officially named the Church of the Intercession, the structure was better known as the Cathedral of St. Basil the Blessed or simply St. Basil’s for its connection with a poor prophet who predicted the Moscow fire of 1547. With its excessive structures of domes, towers, turrets, cupolas, spires and arches, St. Basil’s is one of the most identifiable structures in Russia. The opulent history of Red Square is echoed in many paintings by Vasily Surikov, Konstantin Yuon, and few others.

Architect Joseph (Osip) Bovean Italian-Russian neoclassical architect redeveloped the square in the first half of the 19th century, after the 1812 fire of Moscow during the war between the Russian Empire and Napoleonic France. The trench near the Kremlin wall was filled up with sand, the parapets were eradicated, and a huge classicist building with trading rows was built to replace the numerous shops destroyed by fire.

Red Square in the 20th Century
After the October revolution in 1917, the Red Square turned into a place of public events and debates. The first such public function was International Workers’ Day in 1918. The next year the Red Square witnessed the first Red Army parade, where the leader of the new country Vladimir Lenin addressed the nation from the top of a truck. In the coming years, military parades became a prominent part of the November 7 annual celebration of the October revolution. In a historic display on November 7, 1941, ranks of soldiers paraded beside Soviet tanks straight from Moscow to the front during World War II, then only 50 kilometers away. In 1923 the military parade was filmed for the very first time from the air.

Even after the collapse of the Soviet Union, Red Square remains an important centre of Russia’s cultural life and a top tourist destination. Although fewer people may be lining up outside Lenin’s tomb, large crowds continue to gather around Red Square for rock concerts, festivals and other events. In 1990, UNESCO has also nominated Red Square as one of its World Heritage sites. Next to the Kazan Cathedral, is the State Department Store ‘GUM’ which is an abbreviation for Gosudarstvenny Universalny Magazin meaning State Department Store. GUM is now converted into a huge shopping centre, largely selling expensive premium-segment items. The square also became a burial place for the country’s top leaders. Apart from Lenin, who has “rested” here, more than 400 individuals including Communist party leaders and also other outstanding personalities like cosmonauts were buried outside of the Kremlin’s walls by 1984.

After the collapse of the U.S.S.R., the square became more accessible, with public crowding here not only on official holidays. It has hosted shows of many western artists and seen Russian leaders together with heads of other states. For example, in 1994, the Queen of England Elizabeth II visited Russia – marking Russia’s separation from its Communist past.