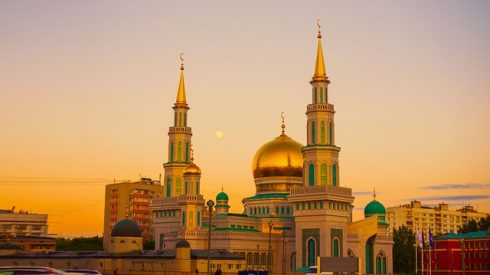 Magnificent and royal, the Cathedral of Christ the Savior is the tallest Eastern Orthodox Church in the world. From the glorious opulence to the grand interiors of the temple, everything expresses the prestige of the temple and its importance for the Russian Orthodox Church. It is the idyllic place to attend an Orthodox Mass or to climb its domes and appreciate the beautiful landscape of Moscow. The Cathedral of Christ the Savior is the most important cathedral in Moscow, even before the Cathedral of St. Basil, with an exceptional and peculiar history that dates back to the nineteenth century. It’s officially named as Cathedral Temple of the Christ the Savior (the Redeemer) of the Patriarch of Moscow. The temple is located in the central part of Moscow, near the Kremlin and next to the Moskva River. The style is the called Neo-Russian and its Byzantine architecture. It was inspired by the Hagia Sophia (Church of the Holy Wisdom), located in Istanbul, Turkey, the former Byzantine Empire.

History and Architecture
The Cathedral’s history originates in 1812, after the triumph of Russian troops over Napoleon’s French army. Tsar Alexander I wanted a temple to be erected in Moscow, with the name of Christ the Savior, in honour of those who fought and died in the Patriotic War of 1812, It was also to be erected as a historical monument and as a homage and as a gesture of thanks to the sacrifice of the Russian people. For this, the Tsar signed a declaration stating his gratefulness to Divine Providence.

However, after a few historical ups and downs and few important situations in the works and designs, it was not until 1839, when the first stone was laid, already in the time of Tsar Nicholas I. The architect selected was Alexander Vitberg, for the construction of the Cathedral on Sparrow Hills, the highest point in Moscow. However, the soil began to sag under the weight of the building and the work was stopped. During the reign of the next emperor, Nicolas I, the project was commissioned to the prestigious and trained architect Konstantin Ton, a native of St. Petersburg. He tried to represent the Russian national tradition in the area of church buildings. The construction on the new site was on the bank of the Moskva River where the ancient Alekseevsky Convent existed and which was later moved to Sokolniki. The construction site was very well chosen and the temple was visible from any point of Moscow. It took almost 44 years to construct the temple, between 1839 and 1883. Preceding the coronation of Tsar Alexander III on May 26th, 1883, the temple was sanctified for the very first time. The largest dome of the Cathedral was covered with gold with a new method of those times called gold electroplating. The rich interior of the Cathedral of Christ the Savior consisted of paintings and ornaments of stone, which were made by the famous Russian painters like Vereshchagin, Surikov, Kramskoi.

Cathedral in the 20th century
The Russian Revolution of 1917 included religious harassment, the closing and knocking down of temples. As Stalin’s led to power, he ordered that the Cathedral of Christ the Savior be wiped out with explosives. The reason for the annihilation of the temple was the conflict between its dominant ideology and the atheism in the Soviet Union. By the order of Stalin, the Cathedral of Christ the Savior was blown up on Dec. 5, 1931. After destroying the Cathedral in 1931, it took almost a year and a half to pull apart the remnants.

Stalin planned on the same site for the glory of the USSR, the Palace of the Soviets. It was meant to be the tallest building in the world, with 415 meters high, with a statue of Lenin of another 100 meters long. However, after the commencement of the initial works, it never came to see the light largely due to lack of funds.

In 1958, during the government of Nikita Khrushchev, a huge outdoor swimming pool was built at the same location. It was the largest in the world, with hot water and 129 meters in diameter. However, the Moskva Pool existed only until 1994.

Regardless of criticism in 1965 for the destruction of the cathedral made by the first Soviet astronaut, Yuri Gagarin, it was not until the late 1980s, when key members of the society and the Russian Orthodox Church of Moscow met to support the rebuilding of the temple. This initiative had the backing of the first President of Russia, Boris Yeltsin, and also of the then Mayor of Moscow, Yuri Luzhkov. In the early 90s, with the approval of the Russian Orthodox Church, and contributions of other private funds and donations, substantial public funds were collected. It is assessed that almost one million Muscovites contributed to their money. However, there were also controversies over its tall budget in the midst of the economic crisis. It is estimated that nearly 200 million dollars came from various public contributions and donations. The new Cathedral is based on the original standard of Konstantin Ton, modified to the best innovative technology of the late Twentieth century. The works began in 1995 and the Cathedral of Christ the Savior was sanctified again in the year 2000, after its destruction in 1931, in a grand ceremony held on August 19 by Patriarch Alexis II.

The Cathedral of Christ the Savior is prominent for its stone facade and white marble, with four columns, as well as its five golden domes with Orthodox cross included. The highest dome reaches 103 meters. They are visible and noticeable, from many points of Moscow. The architecture is based on the Byzantine models, and it has the capacity for around 10,000 people. In the interior decoration of this magnificent temple, granite and stones pieces of all colours and possible tones are found. Also, important highlights are the icons, the choirs, and the belfries. Naturally, you can’t miss the superb iconostasis (a screen bearing icons and religious painting, separating the sanctuary of a church from the nave). The temple is segregated into several chapels and galleries, along with the Cathedral, which has portals of different sizes. The Church of the Transfiguration attracts large audiences. Different places of the cathedral evoke the memories of the Patriotic War of 1812 in their images and sculptures and those who gave their lives for Russia.