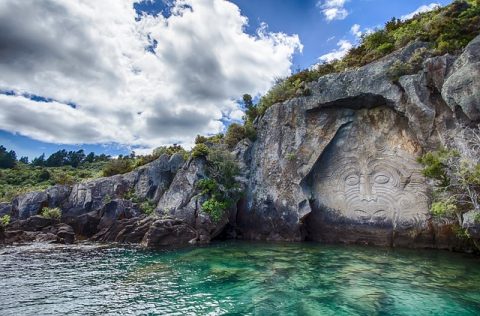 The Maori culture is one of the chief attractions for vacationers visiting New Zealand. Having been settled by early Maori 700 years ago, and then colonised by the British in the 19th century, Aotearoa or New Zealand meaning ‘Land of the Long White Cloud’ is considered as a young country. However, their opulent and diverse history makes up for it being ‘fresh’ one. The ancestors of the Māori were Polynesian people originating from south-east Asia. The Maori People have an interesting history which, due to New Zealand’s distance from other land masses, began with centuries of remoteness from other global cultures.

Here is a guide to 10 historical Maori sites and landmarks, New Zealand.

Ruapekapeka
Ruapekapeka Pa is the location of the last clash of the first campaign of the New Zealand Wars (The Northern War of 1845–46) and is the only battlefield of the Northern Wars where defence battlements are evident. Built by Warrior Chief Te Ruki Kawhiti in late 1845, the Ruapekapeka Pa consisted of a network of rifle trenches, bunkers, tunnels, and a double stockade. It was purpose built by Kawhiti to counter European warfare techniques of the time. In contrast to traditional pa, Ruapekapeka did not guard borders, command important routes of communication, or protect civilisations. Ruapekapeka Pa could be abandoned without any hesitation. The purpose was to lure the British army into battle on a challenging location. Ruapekapeka was a different type of pā, intended to stand heavy attack. The British forces wanted to repress the local mutiny that they regarded as a risk to the power of the Crown. On December 10, 1846, the battle was joined and by the next morning it was completely finished. The Maori defenders disappeared, while the British took the defences.

Ōtuataua Stonefields
Two centuries ago, Maori were still cultivating 8000 ha of volcanic stonefields around Tāmaki-makau-rau, the Auckland isthmus. In place of which now there is just 160 ha of the stonefields remaining. They were largely neglected after the early 19th-century inter-tribal Musket Wars and were absorbed by the urban spread. On 10 February 2001, one of New Zealand’s oldest sites became its newest reserve, the Otuataua Stonefields Historic Reserve.

Takiroa Rock Art Shelter
Dating back as early as the 1400s, charcoal and ochre drawings adorn the limestone caves and overhangs of the valley of the Waitaki River.  The origins of who made these artworks are unknown, but bones found from moa and other extinct bids indicate a very early start. The drawings of European ships and animals propose that the custom of painting here was renewed. The images on the walls illustrate nature, birds, animals, people and even abstract forms. 500 years ago the valley of the Waitaki River was a well-known seasonal hunting and fishing route. Takiroa was at a tactical location, giving forewarning of the dangerous strangers or nasty climate.

Pāpāmoa
Pāpāmoa is the site of an important pā complex spanning volcanic hill country, which once looks over fertile coastline dune plains and fisheries. This agricultural area was popular amongst the Maori tribes that lived here. The Papamoa Hills also offered good views in all directions, which gave the natives the advantage of being able to see any aggressive movement in advance. The coastal plain and along the idyllic sloping hillsides of Pāpāmoa is a witness of the extensive progress from Polynesian colonists to the Māori who would meet European society.

Ōtātara Pā Historic Reserve
At 33 hectares the Ōtātara Pā site – which is in fact comprised of two isolated settlements – is one of the most noteworthy and biggest historical locations in New Zealand. Ōtātara has an amazing view of opulent kumara gardens, fishing, fowling and flax and raupō resources in the swamplands and the then open and crossable Tūtaekurī River. This made it a privileged location for settlement. Otatara Pa Historic Reserve covers one of the most protective settlement complexes in New Zealand. It is one of the earliest Maori pa sites in the Hawke’s Bay area.

Puketakauere Pa
On June 27, 1860, Major Thomas Nelson, ordered the attack of the Puketakauere Pā. Accurate musket and shotgun fire from the rifle ditches and trenches of the Maori defenders ambushed the men of the Grenadier and Light companies of the 40th Regiment even before reinforcements arrived. This is considered as one of the significant moments in the First Taranaki War.

Rangiriri
This area of the Waikato was where a decisive battle of the New Zealand Wars was played out. The Waikato War of 1863-64 was the most severe and demanding of Queen Victoria’s war in New Zealand. The King Movement or the Kingites lost 47 men which were more than the British loss, but their biggest loss was the 180 captured. Bloody Rangiriri’ was the key battle in the Waikato invasion.  It threw open the river basin to imperial troops, but at a huge cost.  The British suffered more casualties than in any other conflict in the New Zealand Wars.  Rangiriri Pā was made up of severe ramparts, ingenious escape routes, and camouflaged rifle pits.  But its warriors were outnumbered nearly three to one. Today you can walk the remaining earthworks and picture the Māori defenders firing muskets loaded by women who fought and died with their men.

Waitangi Treaty Grounds
The Waitangi Treaty Grounds was where the first accord between the British Crown and Maori chiefs was signed in 1840. The document, known as the Treaty of Waitangi, has its disputes because of its conflicting descriptions but it is still an important part in society today. Signed on the 6th of February, 1840, the Treaty of Waitangi is the founding document of New Zealand. It gained British rule over New Zealand. Two versions in English and Maori were presented and over 540 Maori chiefs signed the documents.

Kororipo Heritage Park
It is a place where Maori and Europeans existed alongside. The Kororipo Heritage Park incorporates the Kerikeri Basin, the Stone Store, Kemp House, Kororipo Pā, and Rewa’s Village. The pā was a strategic site for northern Māori, culminating as the fortress and headquarters of famed and feared Māori chief Hongi Heke. Nobody travelled pass Kororipo Pā without an approved permit.

Māngungu Mission
The largest signing of the Treaty of Waitangi in the country took place here, after extensive discussions and negotiations with over 70 chiefs giving their approval before 3,000 people. This event reminisced each year on 12 February with festivities. Māngungu was set up on the shore of the Hokianga Harbour in 1828 as a Wesleyan Mission station.