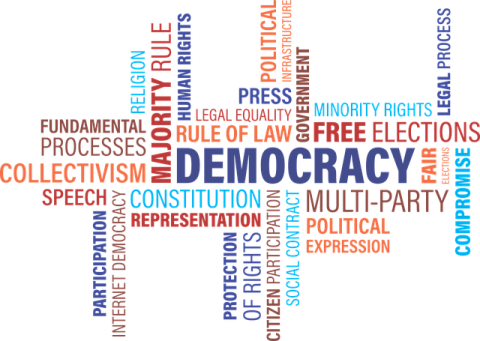 Democracy is perceived as one of the crucial models that present societies make every effort to build or protect. Democracy as a structure of governance is invented to permit extensive representation and comprehensiveness of as many people and outlooks as possible to nourish into the running of a fair and just society. Democratic principles are in agreement with the ideals of universal independence such as the right to free speech. Democracy evidently assists to control unanswerable power and manipulation by the selected few at the cost of the many, because basically democracy is understood as a form of governance by the people, for the people. This is often executed through elected representatives, which therefore requires free, transparent, and fair elections, in order to attain acceptability.

Diversity was regarded as a visible sign of the vibrancy of a comprehensive and multicultural society, something to be admired and considered throughout all levels of society. However, the truth is that our society is still governed by few selected privileged people and inequality is deep-rooted. The innate yearning to power and control in the hands of a small circle blocks the vision of a diverse, meritocratic system of social progression.

Diversity in United Kingdom (UK) is not what it used to be some thirty years ago.  In recent times government policies, social service practices and public perceptions have been outlined by a particular sympathetic thought on immigration and multicultural diversity. UK’s immigrant and ethnic minority population has generally been made-up by large, well-organized African-Caribbean and South Asian communities. These groups were originally from Commonwealth countries or formerly colonial territories. Policy frameworks and public understanding and many other areas of social science have not caught up with evolving demographic and social patterns of recent times. UK can now be characterized by ‘super-diversity,’ a notion intended to underline a level and kind of complexity surpassing anything the country has previously experienced. New patterns of super-diversity pose major challenge for both research and policy makers.

The Modern United Kingdom is multicultural. Since the Second World War the UK has seen an influx of immigration that has radically altered its nature. The population has changed from one that was overpoweringly white, ethnically British and Christian, to one set up by creeds, cultures and communities from all over the world. A degree of demographic diversity that would have been scarcely imaginable in the middle of the previous century now forms an inescapable part of British life. The term ‘multiculturalism’ invokes these demographic changes, the intersecting political, legal and theoretical debates over how to respond to them, and governmental attempts to accommodate and even promote cultural diversity. Yet the economic, political and security challenges of the new millennium have put pressure on official support for multiculturalism, with several prominent politicians and social commentators – including then Prime Minister David Cameron – rejecting key aspects of it. It is still uncertain whether this rhetorical shift in the discourse of multiculturalism will translate into a full-scale retreat at the level of policy and law. Nevertheless, it is clear that UK diversity is experiencing a period of re-evaluation. It is also clear that the pressing practical and theoretical questions posed by diversity in UK remain unresolved. However diversity is essential for the acceptability of any typical democracy. Over the years it has been seen low levels of voter participation and poor engagement among minorities and other overlooked groups. Women, black and minority ethnic communities, young people or those with disabilities – vast number of electorate have felt dull to use their right to vote. This failure has narrowed the political perceptions. If politicians are from related experiences, and have similar experiences and outlooks, they begin to look unfamiliar to many of those they represent. That in turn prompts people to separate from politics. But if radicals, who don’t believe in democracy and a comprehensive society, influence people through acts of violence that multiculturalism doesn’t work, a more divided society is formed.

Rather than backing away from diversity, accept it unreservedly. The best talents in society should be used to deal with threats such as terrorism. People with experiences, skills and an understanding beyond those of narrow elite should be included. Those from marginalized communities where radicalism grows in the dark could be stimulated to share empathetic views of how to attack its roots. Inequality should be viewed as a whole and more leaders are needed who the underrepresented can relate to. If politics was more reflective and representative of the population, it would help address voter apathy and shape the sorts of policies desperately needed. This is not an unmanageable accomplishment. The USA, with its past of horrific slavery and segregation, elected a black president with a Muslim middle name and an African surname. In Ireland, a country formerly defined by its Catholicism, choose an openly gay, half-Indian Prime Minister, Leo Varadkar.

UK in the 1950s was a country arranged by class and region. But in most of its cities, suburbs, towns and villages there was a good chance of expecting the attitudes, even the behavior, of the people living in a selected few neighborhoods. However, today that is no longer the situation. To certain people, this is a cause of regret and disorientation. It is viewed as a change which they connect with the growing incivility of modern urban life. Whereas to others it is an indication of the expected, and longed-for, sign of modernity. After three centuries of homogenization through industrialization, urbanization, nation-building, and war, the British have become freer and more varied. Decades of peace, wealth and mobility have allowed a greater diversity in lifestyles and values. To this “value diversity” has been added to ethnic diversity from two giant waves of immigration. The first wave was made up of mostly commonwealth immigration from the West Indies and Asia in the 1950s and 1960s. These were trailed by asylum-driven migrants from Europe, Africa, and the greater Middle East in the late 1990s.

Time and again the language of liberal universalism that dominates public debate overlooks the real closeness of place and people. These understandings are not hurdles to be overcome on the way to the good society; they are one of its grounds on which it can be established. People will always approve and relate to their own families and communities.  It is the duty of genuine liberalism to struggle for a meaning of community that is inclusive enough to embrace people from diverse backgrounds, without being so extensive as to become worthless.