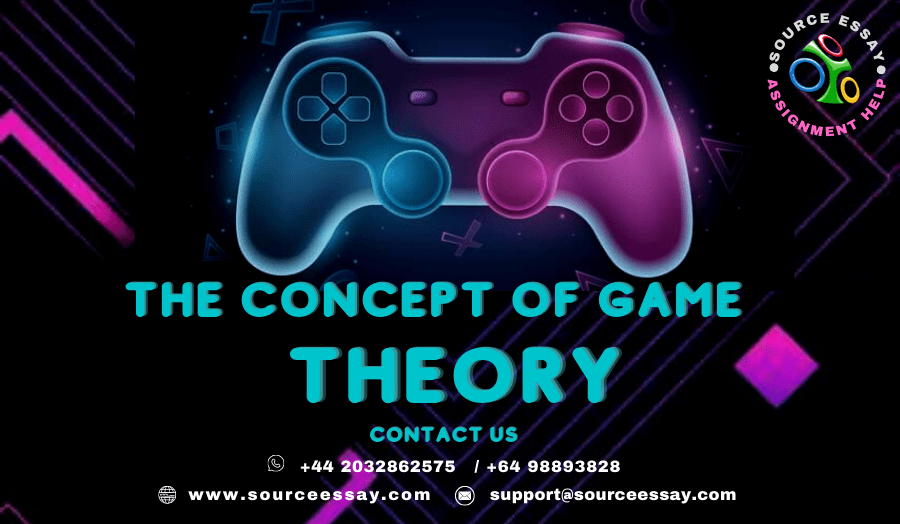 In the present world with complex real-life situations, it becomes necessity to make optimal decision-making, specifically in controlled situations and environment. In that context, the theoretical framework to conceive social situations would be relevant. And, the concept of Game Theory would realise it. In certain respects, game theory is considered as science of strategy to take at least optimal decision-making of independent within a strategic setting.

The pioneers of Game Theory were mathematician John von Neumann as well as economist Oskar Morgenstern during 1940s. And, mathematician John Nash has extended their work on Game Theory and has been regarded for that. Basically, the focus of Game Theory has been the game that further serves as interactive situational model among the rational players (García & Van Veelen, 2018). It has been observed that the core of game theory is that playoff of one player would be contingent on strategy that has been incorporated by other players. The game would identify identities of the players as well as preferences and strategies available alongside the way these strategies could affect outcomes.

On the other hand, any time when situation occurs where two or more players being involved, it would be considered as quantifiable consequences or pay-outs. In that context, game theory can be used for determining most likely outcomes. To know more about the game theory students can take help from SourceEssay online assignment help Toronto experts.

Significantly, the definition of some involved terms in game theory are as follows;

Game: Any circumstances set that would have result, which would be dependent on actions of two or more players or decision-makers.

Players: Players are the strategic decision-makers in context of the game.

Strategy: Strategy is the complete action plan that the player would undertake within the given set of circumstances that would arise within the game.

Playoff: It is the pay out that the player would receive from reaching to certain outcome and it can be of quantifiable form (Grujić & Lenaerts, 2020).

Equilibrium: This is the point in the game where players both have made choice of their decisions and certain outcome is reached.

Significantly, in context to the above-mentioned term equilibrium particular concept can be explored that is known as Nash Equilibrium as John Nash proposed it in context to game theory.

Accordin to free essay writer It is the concept within the game theory where optimal result of the game would be the area where there would be no incentive for deviation from initial strategy. As a whole, any individual can receive no incremental facilitation from changing actions. The assumption would be that other players would remain consistent in their strategies.

One of the most popular examples of Game Theory is Prisoner’s Dilemma. It can be considered that two criminals are arrested for certain crime and prosecutor does not have any hard or accurate evidence to convict them. However, in order to get their confession, officials would remove prisoners from their respective solitary cells and question each one of them in separate chambers. And, the prisoners do not have any mean to communicate with each other and officials are presenting four deals. These are such as;

Thus, to make rational and optimal decisions, the best option would be not to confess. However, under the viewpoint of Game Theory it can be seen that none of the prisoners is aware of the strategy or decision the other would make, so, there is chance that both prisoners would confess and receive five year of prison sentence. Besides this aforementioned game theory examples, there can be seen some other examples also such as; dictator game, volunteer’s dilemma and the centipede game. To know more take assistance from write that essay experts.

The fields of economics and business are the involve widespread application of Game Theory. It has brought revolution in economics through addressing major issues in previous economic mathematical models. For example; neoclassical economics have struggled in understanding entrepreneurial expectations and could not handle the imperfect competition. Additionally, to understand firm’s behaviour in an oligopoly market, the application of Game Theory and its concept can be seen. On the other hand, in the field of business, game theory is highly attributable in modelling the behaviour that is competing between economic components (Bruno, Dell’Aversana & Guidetti, 2018). Business often tends to have different strategic options that might impact their ability to realise economic gain. Therefore, to sort out any dilemmas that business is facing or to make any strategic choice or decisions, application of Game Theory is highly observable.

According to essay typer, the biggest limitation of game theory and its application is that likewise any other economic model, game theory further relies upon the assumptions that individuals are rational actors with having self-interest. Moreover, the theory further needs that protocol for interaction would be precise. However, in real world cases they often tend to be ambiguous. Therefore, for the purpose of economic modelling, game theory is seemed to a limited factor.

Importance and Scope of Game Theory

However, in contrast to the discussion above, it can be stated that game theory is highly important as well as significance in all aspects of decision-making. Specifically, According to thesis help experts in context to present business environment, it can be stated that application of Game Theory would help organisations in making strategic choices both within or outside of the organisations, particularly against the competitors (Yamamoto et al. 2019). In game theory, different situations are presented through simple games that could set up hypothetical scenarios for simulating real-world conditions and predicting behaviour of individuals within that situation.

On the other hand, it can be further said that from its day of inception, game theory has been contributed immensely towards the foundation of strategic observation and options. With socio-economic as well as political problems rises in complexity, further advances in techniques, methodology as well as empirical applications and investigations under game theory is considered. This certainly brings out the scope of Game Theory in context to its practical application in current business world. Therefore, in accordance with the discussions, it can be said that despite having its own shortcomings or limitations, as long as there can be seen the necessity of decision-making and strategic thinking, the relevance, as well as application of Game Theory and its widespread concept, would gain more scope (ÖZEKİN, 2019). Moreover, it is to imply that game theory would not only help in assessing strategic situations to make optimal decisions but would also help in every aspect were dealing with systems of people is essential.

Bruno, A., Dell’Aversana, G., & Guidetti, G. (2018). Developing organizational competences for conflict management: the use of the prisoner’s dilemma in higher education. Frontiers in psychology, 9, 376.

ÖZEKİN, A. (2019). Rethinking the Prisoner’s Dilemma Game within the Framework of the Prebisch-Singer Hypothesis. Yönetim ve Ekonomi Araştırmaları Dergisi, 17(1), 163-178.