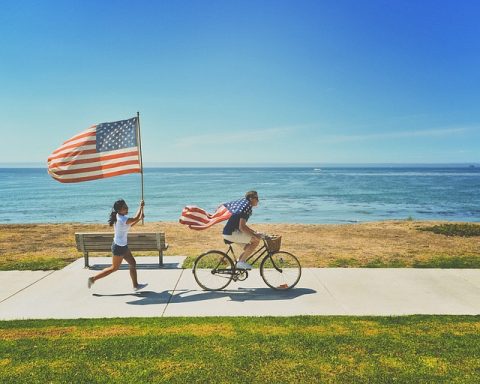 The fourth of July is a federal holiday in the United States of America. It is also known as the Independence Day and is celebrated to commemorate the declaration of independence in the United States of America. The tradition of the Fourth of July celebrations was first started on 4 July 1776 and is still celebrated to this day with a lot of enthusiasm and dedication in the United States of America. On this day the Continental Congress that all the thirteen colonies of America were not subjected and subordinate to the monarch of Britain and were, at last, united, free, and independent states. It was actually voted to declare independence on 2nd July but it wasn’t officially declared until the 4th of July. The Independence Day  is associated with many things including fireworks, parades, barbecues, picnics, carnivals, fairs, baseball games, concerts, political speeches, family reunions, and many other ceremonies. And in this academic writing piece, readers will be able to learn about some 4th of July facts and history.

The initial battles of the Revolutionary war broke out sometime during April 1775. During that time, only a few colonies actually desired complete independence from Great Britain and those colonies were considered to be radical at that time. However, by the middle of 1776 many colonies have actually started to favor the idea of independence. This was largely due to the hostility against Britain. Subsequently, on June 7 a motion for the colonies to be independent was introduced. The vote was actually postponed but a committee of five members was appointed to justify that course of action. A nearly unanimous vote was cast on 2nd July in favor of the motion. On the 4th of July, the Declaration of Independence was formally adopted. This is why Independence Day USA is celebrated on 4th July of every year.

The 4th of July has been celebrated in many ways since then; however, some of those celebrations have been more notable than the others. And some of those notable observances of this day are:

On 4 July 1777, three gunshots were fired in salute in Bristol, Rhode Island. These three gunshots were fired both during the morning and once the evening fell. The Virginia Gazette also issues an article on 18 July 1777 in which the celebration in Philadelphia was noted. This celebration was quite similar to the modern day celebration of the 4th of July. An official dinner was held for the Continental Congress which included toasts, speeches, prayers, 13-gun salutes, parades, music, fireworks, and troop reviews. The ships which were present in the port were also decked in white, red, and blue bunting.

General George Washington marked the celebration of 4th July in 1778 by providing a double ration of rum for his soldiers which was also accompanied by the artillery salute. This was done from his headquarters in Ross Hall, near New Brunswick, New Jersey. A somewhat similar celebration was being held across the Atlantic Ocean by Benjamin Franklin and John Adams as they held dinner for their fellow Americans in Paris, France.

4 July 1779 was a Sunday and because of that, the celebration was held on 5th July of that year.

July 4th was recognized as an official state celebration in 1781. The Massachusetts General Court was the first legislature court to do it.

On 4th July 1783 the first official public celebration which was held in the town on Salem, North Carolina. This celebration consisted of a challenging musical program which was named ‘The Psalms of Joy’ and was assembled by Johann Freidrich Peter. This event was documented by the Moravian Church.

In 1870, Independence Day was declared to be an unpaid holiday for the federal employees by the U. S. Congress.

Independence Day was again changed to be a paid federal holiday in 1938 by the Congress.

The Top Facts about the 4th of July Celebrations

John Adams was one of the members of the committee who were originally asked to justify the course of action which they would have to take to make the colonies independent from the rule of Great Britain. He was also present on 2nd July when the votes were originally cast and he always believed that the correct date for the celebration of independence was 2nd July and not 4th July. This was one of the reasons why he refused to attend or participate in any 4th of July independence day celebrations. According to him, turning down the 4th of July invitations was a way of protest.

It is rather interesting to note that both John Adams and Thomas Jefferson died on 4 July 1826 which was the 50th anniversary of the adoption of the declaration of independence. Both of them played a key role during the vote and movement of independence in the American colonies. Both of these signatories were also the only ones in the Declaration of Independence who served as the presidents of the United States of America.

The fourth of July is celebrated with great pomp and show across the entire United States of America. However, it is actually quite interesting to note that the shortest parade for the fourth of July is held every single year in Aptos, California. This parade is only a little over half a mile long and it measures up to exactly 0.6 miles. This parade takes up two city blocks and features decorated trucks, antique cars, and a large number of walkers. After the parade, there is also a party in the park where individuals can enjoy music, food, and games.

These are some of the most interesting facts related to the Independence Day celebration in the United States of America.

The fourth of July is a federal holiday in the United States of America and is widely regarded as the Independence Day in the USA. This day is actually marked as the day when the Declaration of Independence was formally dated, finalized, and adopted. This is quite contrary to the popular view that the Declaration of Independence was signed on this day. This day has been celebrated in many ways since then. And some of those days include prayers, salutes, gunshots, parades, carnivals, fairs, barbeque, picnics, and many other things.