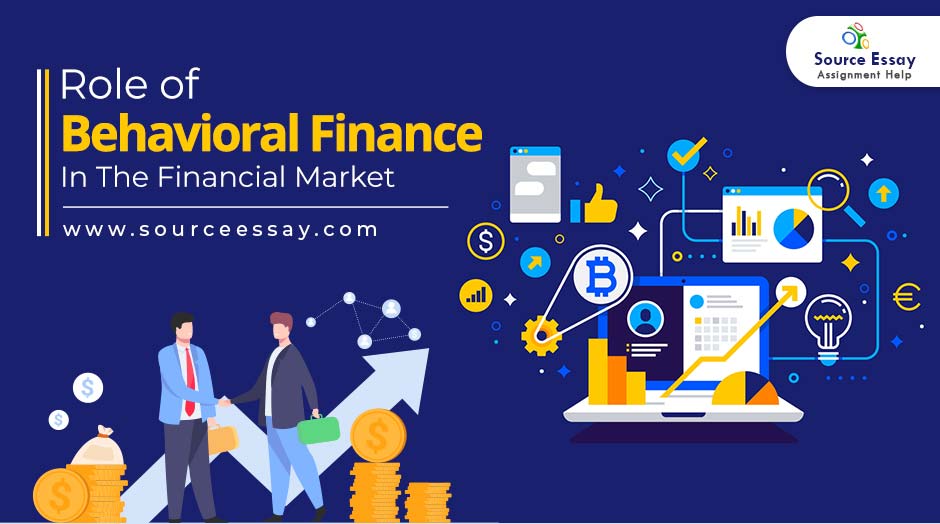 In the competitive world, finances are the blood of any business where the company required more capital to expand business activities. The conventional and standard finances are based on two models the Markowitz model and the efficient market concept. However, the investor decision making solely not based up these model criterions as such decision can never be made in vacuums. Kannadhasan said investors decision making is a complex process that would not be predicted if we take into account the traditional decision-making model. In this scenario, behavioural finances emerged as new tradition broadly classified as some financial phenomenon can be better to apply to understand reluctancy of investor.

The behavioural theory has shown the impact of human behaviours on the investor’s decisions not only considered as supplementary assumption as it is referred to as contradictory approach. Shefrin’s in 2001 attempted to define behavioural impact on financial decision making and subsequent effects of markets. Also, formelt explained behavioural finances closely combine human behaviour with the market phenomenon which plays with both psychological and financial activities. However, the science behind the behavioural study has not much explored in fact its major repercussion is seen in the way the investment decision process directed. Behavioural finances are a far-reaching vision that tries to attempt or understand how cognitive error can influence business performance. Thaler opined some economic factors that are not rationalized directly influence the decision made, thereby acknowledgement of financial market growth could be made(Lin, 2020).

As per the finance assignment help writer opinion behavioural finances combine the principles of social psychological having classical theory to support the stock market fluctuation. On the basis of the study, financial anomalies largely characterized by the investor’s behaviour either they are overwhelmed, equipped with information or posing disparities. Metaphorically, it can be said, behavioural finance is an alternative solution to overcome the difficulties and understanding the finances and psychological assumption of investor decisions.

Kahneman & Tversky (1974) worked hard to prove people decision are not simply lies upon the statistics even, it is based upon the heuristic principle of investors. Emotions are difficult to conclude that includes primary feeling such as fear, anxiety, satisfaction, vanity, desire and happiness. It has been justified by many scholars, emotional stage of individual sizes up the decision-making realms(Kandpal et.al, 2018). Many psychological mistakes are being made by the investors that restrict proper investment in any firm-

Overconfidence– Investors tends to show too much confidence in their judgements, therefore researchers focus on identifying the accuracy of the decisions they make. In many cognitive and behavioural experiments, the cognitive decision is subjective to overestimating decision effectiveness. Nevin found overconfident people poses enormous trust in their capabilities leads to over trading and poor investment decisions. However in many stance overconfidence reflects as the tendency of people to overestimate their knowledge, capabilities and skills.

Many assignment maker and researchers studies overconfidence and examined the detrimental effects of it and show an investor might become overconfident and reflects naturally underestimating the downturn of risks, holding a diversified portfolio, and trading too frequently.

Aversion loss- Loss aversion affects the different level of mentality that an individual might have after a small size gain or loss. Several studies have been progressed in this direction revealing the possibility of loss would get doubled as the powerful motivator,

Loss aversion is a biasing activity that cant be tolerated in the financial decision-making area. It instigated the opposite consequences of what investor wants such as higher return, lower risk, increasing gain and mitigate the resources.

Since the 1960s the risk perception employed to explain investors behaviours. The framework of risk perception involved the trading effect of stock exchanges. It is rather analogous to the discipline of behavioural finances.

Risk perception is a subjective decision-making process often concerning analyzing the degree of risk impact, uncertainty and risk assessment. The notion of risk perception includes interdisciplinary and multidimensional nature following pointed the management of activities and contingency development process(Areiqat et.al, 2019). Risk perception often held by the community or people investor relatable to the probability of risk occurrence. Through behavioural finances, researcher study what investors feel and see the way risk occurred. Get to know more from the last minute assignment help service driven by SourceEssay.

The following indicators are being used to measure the risk perception-

This often occurs when individual private information is influenced by public information. Evidence of group influence has seen in many stances which are taught to consistent and irrational. In this dynamic world, it would be irrelevant to assume fable decision made will be informed and others are aware of this. Herding leads to mutual conversion of the ideas measure the tendency of an individual to mimic actions of a large group(Prosad, 2020).

As a result of fear of loss of capital, investors hesitate to opt for their losses and hoping to recover from the loss in a long time. This is known as the disposition effect. In a 1985 study, disposition was first coined Meri Statman and Hersh Shefrin defined disposition as the tendency of selling a winning position and holding out a losing position. This effect can increase the taxable gain to be paid and the regulation to which investment gets revolutionized.

Terrance Odens claimed after the month of winning investment, this investment will be continued to be performed once carries the portfolio. For any investment professional, the risk of loss will always be a major concern that can help in finding the appropriate referencing point(Birău, 2012).

As per Tilson, other common psychological mistakes investors usually made are-

Estimating future outcomes based on the past data

Misinterpreting the randomness of marketing positions

Not accepting the mistakes

Believing one person success is wisdom to others

Unfamiliarity with techniques being involved

In management terms, feeling and emotions are undesirable components in a long time severely impact the decisions. If there are a lack of emotions, it can destroy the rationality of the person to make informed decisions, thus all these people are become social dysfunctional as per society norms. Background feeling and emotions affecting the financial decision occurs through a phenomenon called misattribution bias(Zaleskiewicz,2015). This reflects if someone is in good mood, he can make more optimal decisions meanwhile good or bad decisions are likely to increase the risk of likelihood. As per cheap assignment help professional SUN is an important factor that affects ones own investment decision gradually without sun one may feel low. Be it as may, an investor tends to sell their stock during sunny days more often.

Therefore it is quite obvious, the decision can be wrong if there are systematic errors are found in the judgement called biases. Financial decision tends to make on high certainty, preclude reliance on fixed rules and decision compelled on institutions. To know more details, take free assignment help online from SourceEssay anytime.

Behavioural finances come as a ray of hope in the field of research analysing the shortcoming of marketing theories. This dimension reflects the different market security anomalies that are overlooked by traditional finance marketing concepts. Thereby it is noticed both behavioural finances and marketing theories are related to investors behaviour for instance how the investor make a decision. Similar earlier traditional finances never show the ways how investment can be increased. Also when biases overlooked and investment made, this can make the better investment also brings confidence(Sharma, 2016). The efficiency of the decision can also reduce the bubble of crisis and failure of investment procedure in the financial market as seen today in the stock market. So if behavioural finances principles are applied then controlled measurement would definitely bring the large investment in the stock market. Therefore it can be said not directly but indirectly behavioural finances impacting the investment pathways and would increase the finances in the financial markets.

To conclude, it can be said, we should use the behaviour of financial principles and must recognize the events affecting investment decision. After collecting the information and performing the empirical study, this article further comes to the conclusion a better study of behavioural finances still required to demonstrate the actual impact. It has been determined in the study behavioural finances closely combine the human behaviour with the market phenomenon which is plays with both psychological and financial activities whereas emotions are difficult to perceive often included primary feeling such as fear, anxiety, satisfaction, vanity, desire and happiness justified emotional stage of individual sizes up the decision making realms. Despite this some economic factors that are not rationalized directly influence the decision made, thereby acknowledgement of financial market growth could be made.

Areiqat, A. Y., Abu-Rumman, A., Al-Alani, Y. S., &Alhorani, A. (2019). Impact of behavioral finance on stock investment decisions applied study on a sample of investors at Amman stock exchange. Academy of Accounting and Financial Studies Journal, 23(2), 1-17.

Lin.M.2020.Why Investors Are Irrational, According to Behavioral Finance. Available at- https://www.toptal.com/finance/financial-analysts/investor-psychology-behavioral-biases Data accessed on 9 June, 2021

Sharma, A. J. (2016). Role of Behavioural Finance in the Financial Market. International Journal of Business and Management Invention, 5(1), 1-5.