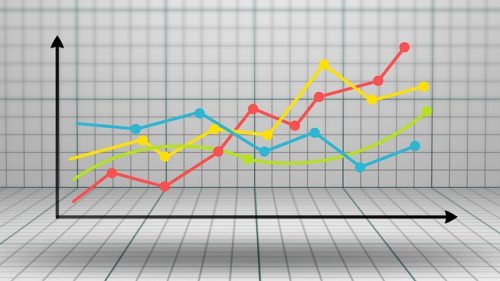 Inflation takes place either when prices go up or when it takes more money to buy the same items. Inflation rate reflected by consumer price index (CPI) signifies an overall upward price movement of goods and services. The rates of inflation influence the stock market volatility and risk.

In the U.S. inflation is measured using the Consumer Price Index (CPI). It is a measure of the average change over time in the prices paid by consumers for a selected list of goods and services. Indexes and average price data for select utility, automotive fuel, and food are available. Basically, the CPI is the average price of a basket of goods and services that households typically purchase.

Relationships between stock market returns and rate of inflation:

There are two ways rate of inflation directly influences stock prices which unnerves stock investors. The first relates to how we value future income.When you purchase a stock, you are actually buying a long stream of future cash flows based on the profits of the company. The value of the company and its stock price is based on how much these future cash flows are worth today i.e. the “present value.” The present value of any sum of money expected to be collected in the future is computed by factoring in the impact of interest rates and inflation.

For example, you win the lottery of US$10,000 and are offered option of either US$10,000 in a year’s time or $9,600 immediately. What would you chose to do?  If you don’t have any serious debts that need paying off, you would try to ascertain the current value of $10,000. This is done by dividing it by 1 plus the interest rate you could readily get at a bank. Assuming that there is no inflation, let’s say 3 percent. Hence, the present value of US$10,000 a year from now would be US$9,709. This means it’s beneficial to wait, rather than taking the money now.

We can calculate the same scenario but with inflation, which is expected to be 2 percent. Inflation will affect the bank rate which will be 5 percent, and as a result that US$10,000 is actually worth only US$9,524 today. In this case, take the US$9,600 now.Since inflation made the “discount rate” higher, the value today of the future $10,000 was reduced. The same thing happens to stock market returns. Since a stock’s price is just the risk-adjusted present value of the company’s future cash flows, a rise in inflation will cause it to fall as well.

A second way rate of inflation directly affects stock markets has the conflicting consequences. That is, it should cause them to increase in value.Rising prices means companies are able to make more money from every computer, TV or coffee they sell. For example, aflorist, who sold a bouquet for $30 increases the price to $35 because of strong demand. While the cost of the flowers and vases may have also climbed at the same pace, the florist still makes more money because profit goes up too.

This leads to higher future cash flows and therefore agreater present value today.In theory these two effects of inflation should cancel each other out. Nevertheless, stock screener and market returns are usually beaten when inflation rises.There are some proofs thatfew investors grieve from something called “inflation illusion.” They are apprehensive about the present value effect of inflation of stocks but at the same time they overlook the growth in cash flows and profits that result from higher inflation. In fact this leads to stock prices falling when they shouldn’t. There’s another indirect way rate of inflation affects stock market returns. To comprehend this, consider how inflation varies through the business cycle, which is a way of measuring the growth of the economy from the beginning of an expansion to the end of a recession.

At the start of a cycle, inflation is practically non-existent or even negative or low (the financial crisis of 2008.) But as the economy warm up and people have more money to spend, companies begin to sell more goods and services at steadily increasing prices, earning higher profits, while employments figures are high.

As production of goods and services increases in the economy, the demand for raw materials and workers also increases. This leads to pushing up prices and higher wages. The fastest increase in take-home pay in nine years was another “warning sign” that scared the investors.