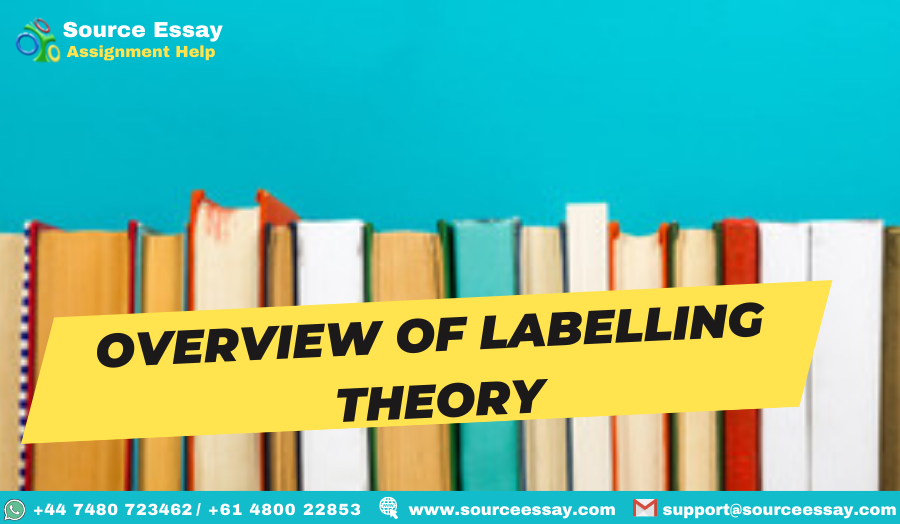 Labelling theory is defined as the way people identifies and behaves in ways those help reflecting the way others label them and is also associated with the crime sociology since labelling any person deviant unlawfully and that leads to poor conduction. As stated by Alzubi, Nayyar & Kumar (2018), labelling theory is the approach in sociology of deviance, which focuses on diverse ways agents of social control get attached to stigmatizing stereotypes to diverse groups. This labelling theory has been associated with Becker’s work and that has been the reaction to the sociological theories and that helps in examining the characteristics of deviants. Sociologists agree with stigmatizing labels and it comprises of specified and negative perceptions and stereotypes those have been attached to label. It is quite evident in and transmitting by mass media and also interactions between themselves. As opined by Argueta & Lonergan (2020), it is the sociology approach and people are provided labels on basis of others viewpoints of tendencies and behaviors. It is about positing self-identities as well as behavior of individuals those are being determined and influenced by terms those are used of describing and classification of the same. The labelling theory comprises of special roles that helps in providing deviant behavior and that helps in expecting the postman and adhering certain rules and that includes both non-criminal and criminal activities. It is about controlling attachment of stigmatizing stereotypes to the particular groups and that results in labelling the behavior (Augustyn et al. 2019). The research aim is evaluating and analyzing Labelling theory. In this research study, labelling theory followed by types of labelling, principles to labelling theory, stages of labelling theory and importance of labelling theory are discussed.

As mentioned by Pir & Parthiban (2022), labelling theory helps identification and behaving the ways of reflecting others as per labelling them. Crime is constructed socially and interactionalists help in inherently deviating act and is resulted as the act and individual. It provides deviating the long-term consequences for identification of personal social activity. Primary deviance helps inclusion of minor deviant acts and behaviors provide little effect on the self-concept of the person. Labelling theory helps negatively deviating to groups, cultures and people. It also helps in positive reaction and is responsible as per the dependence on reasons. According to the opinion of Willis (2018), primary deviance helps initial violation as the part of social norm and inclusion of minor deviant acts and the behaviors provide little reaction and that has been providing less impact and effect on the self-concept of the people. Consequences are stigmatizing that is far-reaching in nature. Stigma helps operate the master status and overpower the different aspects pertinent to social identity. Labeling theory is of 5 stages: publicly labelling, further deviance, official deviance treatment, deviant career and master status.

Augustyn et al. (2019) had opined that 1st step is public label as the deviant and that leads to rejection from social groups. It is about labelling junkie that is to be rejected by the family. The 2nd step is encouraging further deviance and drug addicts also help turning to crime for financing the habit. Official deviance treatment has another similar effect and EG helps convicting criminals for difficulty in finding jobs. Deviant career helps completing the individuals for joining the deviant group and the individual confirms with accepting the identity deviant. Master status is the 5th stage of label that helps overriding the relationship forms outside deviant group. As mentioned by Barmaki (2019), labelling theory helps representing certain groups present in mainstream media and that helps creating moral panics that helps in exaggerating extent. According to the thesis help experts Labelling theory has deviance for making labelling as well as providing punishment by authorities for reducing deviance for making few rules. It is about attempting in controlling crime, which may sometimes backfire and making the situation quite worse.

As per the opinion of Ikbal & Latuconsina (2021), the labelling process helps includes diverse labelling theory that includes lasting effects on the self-identity of the people and that helps in handing out of the delinquents. It is also isolation from the society and hostile towards law-abiding citizens and that helps leading to deviance amplification. Criticism has been surviving and continuing for hauling labelling theorists and that helps identification through empirical tests with the inclusion of characteristics of status and secondary deviance hypothesis. According to the outlook of Klöcker, Weissenboeck & Rentmeister (2020), labelling theory helps predict the status features and that helps in controlling the deviant behavior. It labelling varying controlling the previous deviant behavior. Secondary deviance helps amplification long casual events and that helps inclusion of negative labels, objectives and perceived opportunities as well as deviant self-image. It is the important aspect that is susceptible to issues that results of staying stigmatized. Society encourages the individual and that helps society in teaching the members within and permanent labels as well as stigmas attached. It is the deviance that social controlling the agencies for designating the people as the deviants (Pir & Parthiban, 2022).

Ikbal & Latuconsina (2021) had stated that labelling theory helps in social controlling of agencies that helps in designating the people as the deviants and that helps accepting label. It helps contributing acceptance of deviant roles as well as self-images and that helps contributing to social control and personal identity. It helps thinking about the fictional vigilantes and that helps influencing in significant way for labelling them. It also helps in adopting label with exhibition of actions, attitudes and behaviors those are associated with label. As mentioned by Klöcker, Weissenboeck & Rentmeister (2020), it is the process of attaching descriptive word and that helps ascribing people’s labelling for controlling and identifying deviant behavior. It also helps positing self-identity as well as behavior of the individuals and influencing for describing and classification of the same. Labelling also contributing to accepting deviant roles as well as self-images and that helps causing original acts for constituting the primary deviances. It helps providing insights to the people those accept deviant labels. To know more students can take help from university assignment help experts.

As per the outlook of Pir & Parthiban (2022), labelling theory is important as the deviance is worse made by labelling as well as punishment by authorities and that helps reduction of deviances for making fewer rules for the people for breaking. Labelling theory has rich tradition and that helps enforcing rules to moral entrepreneurs. It processes of stigmatizing that has been providing lasting effects on the self-identity of people and reaction has occurred. It is about criminal career and the outside with isolating the society and is also hostile towards law-abiding citizens. It is known as deviance amplification and that triggers event sequences and in-case it continues, it will be internalizing label and conforming it for the same. Willis (2018) had stated that it is no acting of intrinsically criminal that provides no action that has been criminal in nature. It is intergenerational transmission that is labelling and it suggests criminal justice interventions and amplify the offending behavior. It also helps offending behavior that is increased with involving the criminal justice system. It occurs offending behavior that is increased after involving in criminal justice system and it provides people certain labels for behaving the way to operate the same. It also attempts in understanding the way and powerful impact on society.

According to the outlook of Klöcker, Weissenboeck & Rentmeister (2020), labelling theory is important that influences individuals for exhibiting the positive behavior. It shows importance of power relationship for showing relationship between the committing the acts and also seem to be deemed as the actors those are to deviant. In the viewpoint of make my assignment experts Labelling is the process regarding defining group and person in the simplified way and it helps narrowing down complexities of fitting them into the broad categories. The teachers help judging the pupils over time period and that helps making judgements on the basis of the class behavior, learning attitude and interactions with classification of the students. Willis (2018) had mentioned that labelling theory helps stigmatizing someone both morally and socially. Individuals help engaging in criminal activities and that helps involving inverting value of hard work, punctuality and obedience. It is the important approach that helps understanding the criminal behavior and understanding of deviant. It also helps creating sense of helplessness and also helps in improving self-esteem. It also helps encouraging development of independence and responsibility. Confidence is grown and that helps building success of the activities of the children. As opined by Alzubi, Nayyar & Kumar (2018), each of the individual that is aware of the way judges by attempting diverse roles and functionalities in the social interactions and that helps in gauging reactions of the things. As per the labelling theory, it suggests interventions of criminal justice with amplification of offending the behavior. It helps in identification and behavior the shapes for interacting with the customers. The individuals have been labelling as the criminals by society and that helps in engaging in criminal activities like social labelling as well.

The research aim is to evaluate and analyze the Labelling theory. It is stated that labelling theory is the approach in sociology of deviance, which focuses on diverse ways agents of social control get attached to stigmatizing stereotypes to diverse groups. It is also mentioned that types of labelling are formal and informal labels. Formal labels are ascribed to the individuals by the individuals having formal status as well as abilities for discerning the deviant behavior. Informal labels are applied to the individuals by someone else without any professional and official authority for distinguishing between non-deviant and deviant behaviors. It is also mentioned that Labelling theory helps negatively deviating to groups, cultures and people. It also helps in positive reaction and is responsible as per the dependence on reasons. In this context, it is stated that labelling theory helps predicting the status features and that helps in controlling the deviant behavior. It is also stated that Labelling theory is the process of stigmatizing that has been providing lasting effects on the self-identity of people and reaction has occurred.