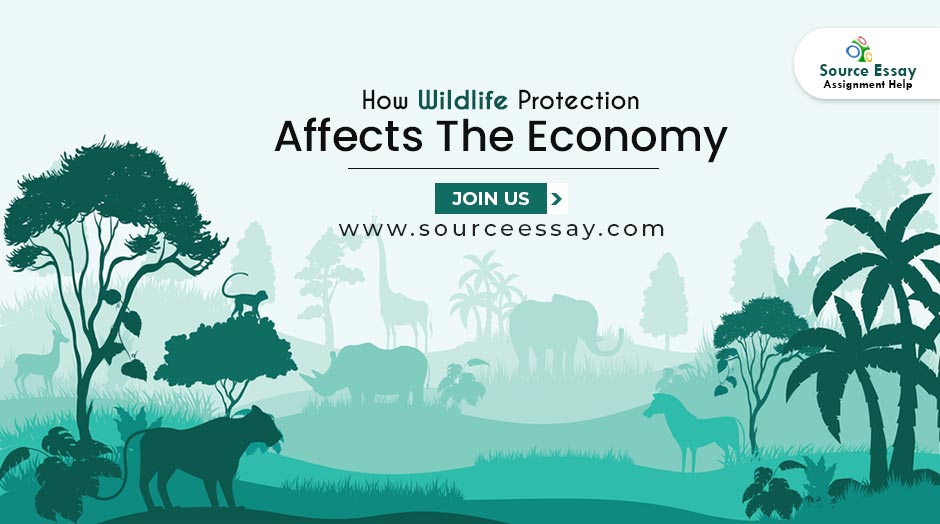 According to the living planet report, 2018 published by The World life Funds, the wildlife population become halved over the past four years. On average world economic forum has documented an astonishing 60% decline in the population of mammals, insects, birds, reptiles, and amphibians. The top threats underpin in this report are directly linked to anthropogenic activities, habitat loss, overhunting, overfishing etc. Carter Roberts, president and CEO of WWF-US said, this has created urgency among the whole nation as the report shows warning shots. It reminds us we need to change.

Wildlife protection causes both cost and benefits to society. Benefits from wildlife predation, livestock, hunting and fishing lead to an almost 56% decline in wildlife and 23% are almost at the edge of survival. Consequently, a reduction in carnivores’ predation on livestock in eastern and Sub-Saharan Africa severely reduces the quality of life (Gren et.al, 2018). Apart from that the conversation of wildlife residence into agriculture land occurring mainly in developing countries causing raises of economic cost but it reduces the animal counts residing on top of food level chain. In this article, we try to present an exploratory overview on the estimation of values and costs of wildlife as well as trying to elaborate national policies meant to describe economic incentives for conflict resolution among stakeholders.

During the conference of the parties of the convention on migratory species (CMS), more than 120 countries came together to decide whether to grant protection to migratory and endangered species such as African lions, polar bears, hammerheads including sharks and whales. Online assignment help team found since these species move from different boundaries, countries that have signed CMS agreements considering adopting the resolution to mitigate the risk of exposure to migratory wildlife.

Over the past decades, policymakers are putting tremendous effort into aware of the benefits and costs of wildlife to the economy. The majority of small island developing states and countries are dependent on tourism, for instance, the global diving industry generates $4 billion in revenue every year from utilizing wildlife resources in fact in Fiji the shark diving industry generates massive revenue for its GDP worth of $42.2 million per year(Lewis, David & Nelson, Erik. 2014).

In a study of United states fish and wildlife services, it was revealed the bird watchers making a huge amount for the US economy worth $32 million similarly Safari in Kenya contributes to $1 billion per year( Gen, 2018).

World economic forum collaborated with the CMS to encourage the free flow of migratory animals also imposes guidelines via countries can reduce the number of threats by making sustainable policies. However, things on the paper could see a wide range of gaps when it moves to implementation

As per the economic prospectus and assignment helper, the population size of wildlife-related to the cost and associated benefits to the society. A few studies have shown the conflicts among the stakeholder and wildlife threat could be adjusted by forming potential economic policies also systematically allocating the cost and benefits to the preservation of wildlife, Many times it has been seen some stakeholders are not ready to compromise while there is some stakeholder who blamed for the wildlife intervene policies to reducing their yearly income. One of the significant reasons was identified is massive changes in land farming over the past 50 years, according to UK wildlife reports. Since 1980s government are offering farming incentives and urges not to convert wildlife lands into agriculture lands, but the recent facts depicted the changes even more worrisome than it was back in 10 years ago.

In Africa, Lions numbers are declining due to illegal hunting poaching, but if we take local perspectives, lions are harmful to the livestock as they pose an innumerable danger. Economic advises poorly designed environmental policies are making the plight of wildlife even worse.

Environmental economies have become one of the significant factors as people have become concerned about environmental damages. The fact that some wildlife whether it is flora and fauna are on the verge of being threatened is considered a special form of wildlife damages.

Economic efficiency is defined as the maximization of well-being and citizen welfare within society. Economists use monetary metrics in terms of defining economic surplus. The surplus accruing to consumer identify the difference between what consumer pay for goods and services and what they get from consuming bundle of goods and services.

Both wildlife exploitation and cost has to take into account while making policy for maximum output, however, it will be necessary to develop the economic incentives. However, it is less clear how much wildlife conservation affects economic growth. The economic theory proposes that services consumption from the natural habitat leads to lesser damage to wildlife habitat. But in reality, economists and assignment writer believed not all the economic activities consumes no natural resources that will be only in theories. For instance, many health care services are using ozone-depleting substances and toxins. A service will be viable only when enough consumers are available to purchase goods.

Based on the simple percepts, economic growth and wildlife conservation are conflicting goals. In principle, conflicts have been surge deeply among stakeholders when some of the stakeholders are not able to fully compensate for the loss caused by the eradication of natural habitat.

In 2015, the 2030 Agenda for sustainable Development formally adopted by the entire United Nation member shared a blueprint for prosperity and the planet now and for the future. At its core, one of the goals of sustainable development continually focused on biodiversity driven policies.

Currently, it was getting dull and mist engulfing the forest spotting survival even more difficult. Although the nations have developed several wildlife conservation policies some of successful in the pocket, stabilizing in human size and reducing the human-caused impacts becoming even more challenging than ever. Earth’s population is around 7 billion estimated to increase by 76 million per year. International Union for Conservation of Nature’s Red List of Threatened Species, established in 1964 reported more than 37400 species is threatened. The purpose of the red list is to inform the decisions taken by multilateral environment agreements. At present, there are 41% amphibian, 34% conifers, 33% red reefs corals, 14% birds, and 23% mammals are at the risk of declining. The IUCN list is used by different governmental agencies, policymakers’ wildlife conservators’ students, and universities massively to create urgency in citizens. With time IUCN list turned out to be an indispensable part of economies (Bulte, et.al, 2003).

Despite the high proportion of the threatened species, countries collaborated with the United national making an effort to reverse or halting the declining biodiversity. A paper published under the journal of conservation biology attributes to thanks how closely a species being fully functional in the wide range reported due to actions. pink pigeon (Nesoenas mayeri), and grey wolf (Canis lupus) were saved from extinction because of collective efforts made by many governmental and non-governmental organizations of different countries(Trauger. et.al, 2003)

Dr Jon Paul Rodríguez, Chair of the IUCN Species Survival Commission addressed during the conference, The IUCN green status aims to formulate a conservational guide and meeting sustainable goal 2030 or beyond to provide qualifying metrics to cheer conservation success. The IUCN green status of the wildlife integrated into IUCNRed list of Threatened species in order to provide a complete picture of decline or increasing biodiversity, risk exposure, and recovery progress. Get to know more about IUCN red list from Sourceessay online essay help team

How Many Species Extinct So Far

Extinction has been identified as a natural process of planetary revolution. In 2020, IUCN have not accounted all the taxonomic group in fact 6% of all have been assessed. Till the data 90% of the 4 billion species either have gone or red-listed by IUCN.

Many experts and essay typer opined we are at the sixth stage of planetary evolution as the living planet index reported an average of 68% decline in wildlife population since 1970. The major loss accounted for the tropical regions that support most of the diverse ecosystem. The United Nations Convention biodiversity on biological diversity set the twenty Aichi Biodiversity targets expected to be achieved by 2022 however no one has achieved the date.

As given in the above chart, we can say out of 900 species have touched the extinction zone since 2015, and as per Roser and Ritchie, 2020 study, 85 mammals, 159 birds, 80 fishes, and 35 amphibians categorized as accurately estimated stats of species being extinct either because of habitat loss or progressive economical activities.

The IUCN provides the data for the groups where approximately 80% of species have been evaluated. Around one-quarter of the mammal’s population, 1 in 6 bird species and almost 40% of the amphibians are at risk.

Many essay helpers said continuous human pressure on wildlife is responsible for pushing the wildlife in the blink of extinction. Why and When did it happen no one knows?

But before taking individual level extinction scenarios, we have to first understand the influence of mass extinction on the country’s economy. Extinction occurs naturally and periodically over time nevertheless background rate to the timing and frequency will be constant. Evolution leads to the generation of new species with extinction. It would tell us there is another specification that has been running off as a part of the evolutionary process

In the case of mass extinction, it is referred to as a much higher extinction rate than normal with time. During mass extinction, at least 70% of the species enter in extinction sphere in the shortest time interval greatly imbalance the food chain reducing the success rate and inhibit the natural process of extinction (Pennoyer 2000).

There are 5 major events of Mass extinction that have been recorded on the earth 500 million years ago history. It shows major mass extinction came into light either because of climate changes or the composition of land, ocean and surroundings.

The challenge of how to slow the pace of biodiversity decline presenting a wide overview of economic activities and humans intervention. The benefits from the wildlife generally are non-markets thus many stakeholders and biodiversity protectors have shown their disregard. Despite the fact that conflicts among the stakeholder and wildlife threat could be adjusted by forming potential economic policies also systematically allocating the cost and benefits to the preservation and preservation of wildlife, therefore at the end this study concludes wildlife exploitation and cost must take into account while making policy for maximum output, however, it will be necessary to develop the economic incentives to come up with everyone shares.